Ian Rankin takes the helm as the 2020 Theakston Old Peculier Crime Writing Festival Programming Chair, following on from recent Chairs including Mari Hannah, Lee Child, Elly Griffiths and Peter James. He will be putting together another stellar programme with Special Guests to be announced in the coming months. The Festival returns for a long weekend of the best in crime fiction from 23rd – 26th July 2020.

Born in the Kingdom of Fife in 1960, Ian Rankin graduated from the University of Edinburgh in 1982, and then spent three years writing novels when he was supposed to be working towards a PhD in Scottish Literature.

His first Rebus novel was published in 1987, and the Rebus books are now translated into thirty-six languages and are bestsellers worldwide. A contributor to BBC2’s Newsnight Review, he also presented his own TV series, Ian Rankin’s Evil Thoughts. Rankin is a No.1 bestseller in the UK and has received the OBE for services to literature, opting to receive the prize in his home city of Edinburgh, where he lives with his partner and two sons. 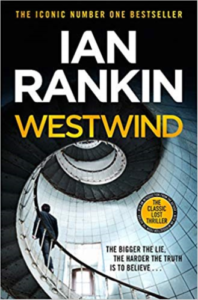 Be one of the next 15 to book a Weekend Break Package and receive a copy of Ian’s classic lost novel Westwind, a ‘lost’ Ian Rankin novel which has been out of print for nearly 30 years!

Originally published in 1990, in a hardback run of just 1,000 copies, WESTWIND was Ian’s fourth novel. Click here to find out more about our Weekend Break Packages

Europe, 1990. As the US begins to pull out its troops in a tide of isolationism, Britain is torn between its loyalties to the USA and its continental neighbours. In America, a space shuttle crashes on landing, killing all but one of the crew on-board: A British man named Mike Dreyfuss, who will become vilified by the US press and protesters. Halfway across the world, Martin Hepton, an English ground control technician watches as they lose contact with the most advanced satellite in Europe. A colleague of Hepton’s who suspects something strange is going on is signed off sick, and never comes back. Hepton decides to investigate his friend’s suspicions and his trail leads him to Dreyfuss, MI6, the American military, and back to his former girlfriend, Jill, who is an up-and-coming journalist with the contacts and the courage to cover the story.