An Interview With Joachim B. Schmidt

An Interview with Joachim B. Schmidt

We were delighted here at You’re Booked to have the chance to interview Joachim B. Schmidt, author of our May 2022 Book of the Month: Kalmann.

Read on to discover more about this bestselling author, find out more about the book, enjoy a free sample, or even pick up a copy for yourself.

So sit down, grab a cup of tea, and join us for an interview with Joachim B. Schmidt. 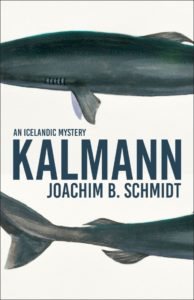 I’m a Swiss born, Iceland based farmer’s son, who realized, while working on a farm in Iceland, that he had a book in him that needed to be written. And then another one, and another one… until, finally, Kalmann came along.

Since I migrated to Iceland, 15 years have passed.  Now I’m married with two kids, but it is thanks to Kalmann that I stopped working on farms, in restaurants, in youth hostels and as a tour guide, which was my last “real” work. I´ll never forget hunting northern lights with a bus load full of British tourists. But that was before the pandemic. Since Covid-19 I´m now fully concentrating on keeping my kids alive and writing books at the same time.

In 2003, I spent a winter on a remote farm in Iceland. That was before Youtube and Netflix would steal all my time. I sat down one evening and started writing a book. I was missing Switzerland a lot, you see, and that (still unpublished) book is full of longing. I found a way to tell the things I’ve experienced and needed to get out of my system. To me, writing is a compulsion. A few months later, the book was finished. I was surprised. Did I just write a book? Later I tried to publish it, but nobody was interested. So, I wrote another book. And another. The fourth book I wrote was finally published, and since then I’m unstoppable. I love the process of creating a story, a world, I love spending time with my characters.

Not at all, no. Although I´ve always had some crime element in all of my books. But Kalmann is closest to a proper crime novel. That’s what I had in mind at least, but some might say that I failed! At some point during the writing of the book, the main character Kalmann took over, and there was nothing I could do about that. And that’s why Kalmann is not just a crime novel, but a character study too.

My initial thought was to write a true Nordic noir novel.  A missing person case in a remote fishing village, a woman detective, and the only witness is the town simpleton, Kalmann. Then I quickly realised that Kalmann isn’t a simpleton at all, but an incredibly complex character with loads of stories to tell. I have no idea, where he came from, but he is in some way a little bit like my 9-year-old self. Kalmann however is a fully-grown man. And he has seen a lot. Too much even.

Almost all the influence. Iceland made me write books. This volcanic island is very inspiring, and I couldn’t tell you for sure why that is. Maybe it’s the vast landscapes, or the energy that comes from within. Maybe it’s the loneliness that one can experience here. For sure the bad weather and the dark winter nights help a lot too. Books are celebrated in Iceland, literature is the biggest treasure here. It´s impressive and addictive.

It’s very intuitive, but plot driven, humorous in places, but tragic at the same time. I love colorful characters, grounded and grumpy. I love to write dialogues too.

I wake up the kids, prepare breakfast and make sure they get to school and kindergarten at the right time. Then I go to the national library where I write until noon or longer, if I´m in the zone. The afternoon I usually spend at home answering emails or organizing readings. It’s like working in an office really, but time flies, especially if I take a quick and well-deserved nap on the couch. So, I have a second coffee and run to get the little one from kindergarten.

When I start writing a book I have outlined the whole story, but there´s room for unexpected twists. In the best case, the characters develop a life of their own, maybe get even out of hand. Then I trust them, and I let them react to the situations I put them in. That’s probably the reason why Kalmann could be compared to the movie “Fargo”, written by the Coen Brothers. For this book, the most difficult thing was to make the police look believable. I cheated a little bit when I decided to let Kalmann tell the story instead of me. He didn´t need to understand the exact process of a missing case. He was just a bystander.

I got ahead of myself before when writing about Kalmann. The question is already answered. This shows how I work: I jump into things, without going through all the points beforehand. When writing I want to get excited myself, I want to know what´s going to happened on the next page. Sometimes I have no idea. There´s a scene where Kalmann is going to his favorite burger joint at a petrol station, but just to tease him I let two tourists sit at his favorite table. I had no idea he was going to completely lose it! So, I was laughing out loud when writing this scene. I can be a bit of a jerk to my characters, but that´s how I show affection. I love them dearly.

I summon my inner demons! No, that´s just a joke. It would be the most boring thing to watch me write. But feel free to make fun of me: Last summer I suddenly had trouble sitting down. My behind was hurting a lot. I must have overstretched the muscles around my coccyx. So, I fixed myself up with a little table for me to write standing up. I know it might sound funny but I am super proud of this invention of mine. It saved my life and here I am, sitting comfortably.

Mostly Icelandic writers because since I´ve fallen in love with Iceland I have been reading a lot of Icelandic literature. To name a few: Einar Kárason, Halldór Laxness, Jón Kalman Stefánsson, Steinun Sigurðardóttir, Gunnar Gunnarsson, Hallgrímur Helgason, Sjón … but recently my thoughts often wonder to Friedrich Dürrenmatt who wrote “The Pledge”; a great crime novel that was made in to a brilliant movie with Jack Nicholson. Sean Penn was directing. Now that´s an ending with a great twist! Very inspiring.

Instead of sending my manuscripts to publishers, I should have tried to find a literary agent first. I didn´t realize that publishers don´t really read all the manuscripts they receive. Also, to get a proper contract it´s good to have an agent.  Furthermore, every day that goes by without writing anything is not a day lost. To write a good book one needs some life experience. Therefore I´d say: keep writing and writing, but also go out there and live! Do all kinds of jobs, put yourself in tricky situations, open your eyes and suck it all in. One day it will pour out onto empty pages and it will be a masterwork.

I have two kids, 11 and 6. We have a summerhouse and I love to read and watch movies. All that keeps me busy. I used to do guide tours, but Corona made me stop doing that, and once I’d stopped, I kind of enjoyed having all that extra time for my family.

Well, here´s an idea to all English publishers out there, a book that really needs to be translated: “Myrkrið milli stjarnanna”; “The Dark Between the Stars” from Hildur Knútsdóttir. It still gives me the chills. The woman in the book wakes up dead tired each morning. Sometimes with bruises. She has no idea why. At the same time a lot of cats go missing in the neighborhood, and then people too. It’s like “Fightclub” meets “The Babadook”, but without the fist fights. It´s one of those books that you can´t set aside until you’ve finished it.

I’m currently touring the German speaking part of Europe with my new book “Tell” which is a reinterpretation of the William Tell saga. Kind of like a Swiss version of “The Revenant”. I´m not really sure what comes next. There might be a Kalmann Part 2 in the works, who knows! Well, Kalmann knows, that´s for sure.

Thank you for joining us Joachim!

DISCOVER THE AUTHOR
ENJOY A SAMPLE OF THE BOOK ON US!
BUY THE BOOK

Kalmann is the self-appointed Sheriff of Raufarhöfn. Day by day, he treks the wide plains which surround the almost deserted village, hunts Arctic foxes and lays bait in the sea — to catch the gigantic Greenland sharks he turns into the Icelandic fermented delicacy, hákarl. There is nothing anyone need worry about. Kalmann has everything under control.

Inside his head, however, the wheels sometimes spin backwards. One winter, after he discovers a pool of blood in the snow, the swiftly unfolding events threaten to overwhelm him. But he knows that his native wisdom and pure-hearted courage will see him through. There really is no need to worry. How can anything go wrong with Kalmann in charge? He knows everything a man needs to know about life – well almost.