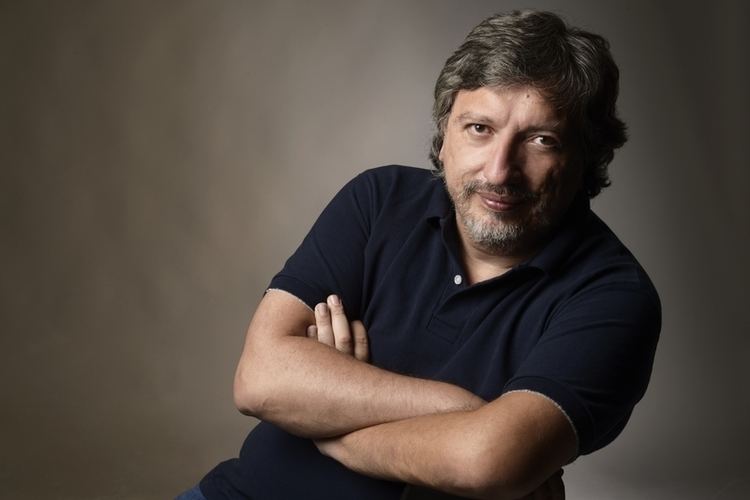 Author of #YoureBooked‘s Book of the Month for July, Sergio Olguin, chats to us about his sources of inspiration, his writing style, and much more..

1.  How would you describe your writing style to someone who’s never read your work before?

It’s always difficult to define oneself. I aim for writing that is lean, stripped back, pure flesh and bone, like a race horse. I try to take out any word that has been put there purely to produce a ‘literary’ effect. I like to think that a reader embarking on one of my books is climbing onto a roller-coaster of feelings, desires and fears. I want the reader not to be bored, give up on the book or get distracted. And I’ll do anything to achieve that. Even write well. I hope that my style is similar to that of Juan Román Riquelme (or, if you prefer, to Matthew Le Tissier).

2.  What is your writing process? What does your typical writing day look like?

I’m chaotic – I don’t have a routine and my only objective, when I’m writing, is not to let a day go by without writing. I don’t like getting up early. Generally I spend the morning on odd jobs. Early afternoon is ideal for editing, or ‘warming up’. Before I start writing I usually play a few games of Age of Empires. Since I never reach an expert level, I never lose interest in building my own empire and destroying my neighbours. I love it when ‘my’ Joan of Arc defeats the English forces (I hope you’ll forgive me). Late afternoon is the best time for writing, with music on in the background. I put together a playlist as I write and I let the songs influence the plot. Some keys to The Fragility of Bodies can be found on my Spotify playlist.

I can keep writing until dawn. Those intense writing days are the best.

3. Have you always been a writer? Was novel-writing something you’d always known you would do?

At the age of eleven I tried to write a novel, but I didn’t get very far. At sixteen I wrote my first stories and began a novel that I managed to finish (but not to publish). That was when I realised that what I most wanted to do was write, both fiction and journalism. For a few years journalism was my job and literature my hobby. I wrote like someone who plays a video game or chess – for the pleasure of the writing itself. Looking back, I can’t think of any vocation that was stronger in me than that of telling stories.

4.  Where do you draw inspiration from for your settings and characters?

From everywhere: from the real world, from books, films, my own life. There’s never one, single source. Rather, there’s a combination of sources. For example, something that happened to me at university is filtered through my recollection of David Lodge’s Small World then combined with a scene featuring a ménage ã trois that I once saw in a North American B movie, the name of which I don’t remember. Verónica Rosenthal, the protagonist of The Fragility of Bodies, is a mix of Philip Marlowe, the erotic life of two or three female friends and my own opinions on how to produce good journalism. It’s always something like that.

5. How do your characters develop? Do you find that your characters take on a life of their own when you are writing? Or are you always completely in control of what they say and do?

I have a special relationship with my characters. I find it hard to let them go. I always finish a book wishing I could go on with them. I love to think that the reader may feel the same way and want to stay in their company, know more about them. When that happens it’s because the characters have a life outside the text. It’s as if they create echoes that travel beyond the book and become a part of our own experience of life, as happens when we meet someone new. When I’m writing, nothing fascinates me more than seeing how characters grow: how a simple description (an investigative journalist, a lawyer in love, a criminal with a white glove) grows in complexity to become a three-dimensional person, and not a set of symbols or metaphors. I’m a passionate reader of books that feature great characters, such as the ones from nineteenth century novels. I’m always delighted to find characters like that in contemporary literature. And I try to create my own characters along these lines.

I don’t believe writers who claim that a character ‘took on a life of her own’. It’s a pretty, romantic conceit. A writer can always control his characters. When he can’t, it’s not because the character has her own life, but because the writer is getting something wrong with the plot, the writing or the character herself.

6. When you are not writing, what do you do to relax?

Relax? What’s that? My routine doesn’t usually change between the periods when I’m writing and when I’m not. I very much like watching Argentine football, cooking, going to the cinema, watching English box sets (the season finale of River is one of the best moments audiovisual art has given us this century and I’m anxiously awaiting the new series of Line of Duty to find out who the mysterious H is, although I think we all suspect the same person, right?) I also like shopping in the supermarket and getting together with friends to eat, drink and talk. Oh, and I like going on Twitter to use base and bellicose language in arguments about football and politics.

The last book I loved was The First Fifteen Lives of Harry August, by Claire North. I was skeptical when I started reading it because I tend not to like science fiction, but this novel goes beyond any genre category. It has the poetry of Borges, the philosophy of Nietzsche and the characters of John Le Carré. I’d like to read more of North, but unfortunately none of her other novels have been translated into Spanish, and I don’t read English. But I won’t be beaten: I’ve got hold of two of her books in French and I plan to persist.

8. What’s one piece of advice you would give to any aspiring writers?

My fundamental advice is: if you want to be a writer you must be a good reader first. You must enjoy reading – it doesn’t matter what. You don’t have to read the classics, or poetry, or authors whose names start with an S. There are no obligatory texts but you must like reading: crime fiction, romantic novels, children’s books, sports blogs, pornographic stories on websites or funeral notices in newspapers. Of all that exists in the world of writing, something should interest you.

Second, and no less important: don’t be scared of plagiarism. If you like a writer, if you were thrilled by a story, try copying them, using them, twisting them to your own ends. There’s nothing better, for a writer starting out, than climbing onto the shoulders of an author you admire. There will be plenty of time to find your own style.

Find out more about Sergio and his novel The Fragility of Bodies here!