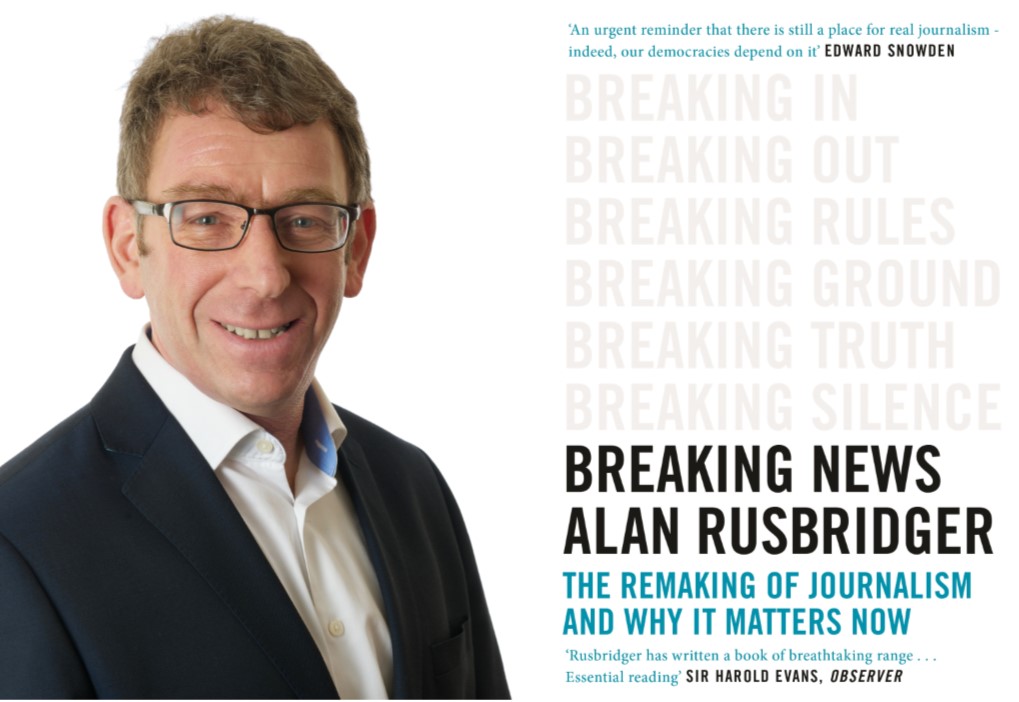 Ahead of our next Berwins Salon North event on 5th September, we dive a little deeper into each of the speakers. This week Paul Berwin from Berwins Solicitors takes a look at Alan Rusbridger’s Breaking News: The Remaking of Journalism and Why It Matters Now…

Alan Rusbridger was editor of the Guardian from 1995-2015.  In his book, he traces the narrative of his tenure, but in doing so – in part because of the  period it covered – he is able to address some fundamental issues of our times; around the impact of the internet,  uses and abuses of power, extreme disruption, the value and undermining of journalism; and the nature of truth.

The Guardian itself excites both loyalty and criticism for its liberalism, and the validity of that criticism depends on many factors. But its unique place in part comes from its longstanding independent from proprietorial control, being owned by the Scott Trust and uniquely funded.

With other outlets, it has had to grapple in Rusbridger’s time with the impact of the internet – where the model of advertising supporting journalism largely collapsed, and like almost every type pf business. it had to struggle with the new world; and  a world which doesn’t stop changing at pace.  Where the imperative seemed to be over achieving reach  ahead of revenue,  somehow revenue had to be maintained. And that had to be done without selling out trust, and making facts malleable. It was C P Scott who said that comment was free, but facts were sacred. In the Post-Trump post-fact world, maintaining that position is itself a battle not just for  a single particular journal, but for a civilisation.  Rusbridger’s account is therefore not a parochial one, but a defining one.

In his time, Rusbridger had to deal with numerous attacks on the values of liberal democracy – the mendacious battle waged  by Jonathan Aitken;   the revelation of  documents through Wikileaks with their own moral ambiguity, the Snowden papers.   In the UK it transpired that we were less free, in some respects, than the United States where freedom of speech is constitutionally guaranteed, and perhaps less liable to be circumscribed.

Through this, Rusbridger had to adapt and adapt again what the Guardian was, and what its reach should be – whether a “newspaper”, as something printed, is actually what it should be about.  With ever shrinking print runs, it nonetheless grew its readership massively, worldwide, and become the the leading English language serious newspaper website in the world by 2014 – but still with an uncertain revenue model.  This is currently based on over a million voluntary supporters   “subscribing” without having to – without any paywall – as well as its endowment.

In the midst of rapid change, it’s  easy to miss the magnitude of the change, and threats it brings. By looking at the workings of a core institution, through the clear-eyed narrative of someone at the centre of it all,  we can step back and have clearer understanding of change and challenge.  This is a book with interest in its detail, but which exposes universal themes for our time.

Book your tickets to Berwins Salon North: The Story of Us now!