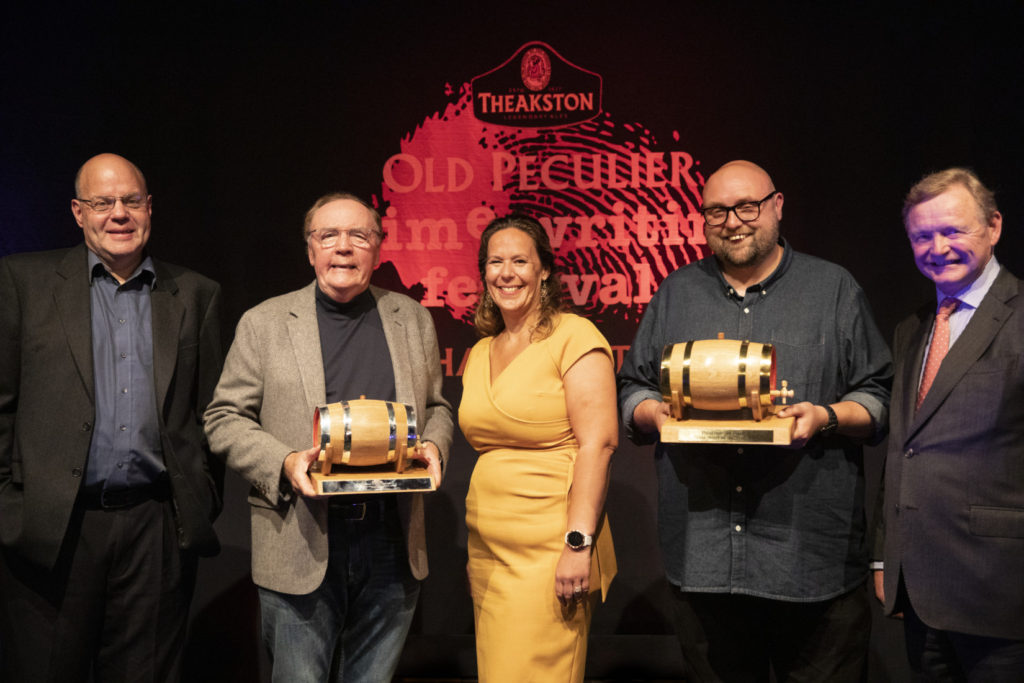 Steve Cavanagh has tonight been unmasked as the winner of the Theakston Old Peculier Crime Novel of the Year Award for 2019.

Now in its fifteenth year, the Award is considered the most coveted crime writing prizes in the country, and one that receives substantial interest from authors, publishers, book sellers and fans of the genre in equal measures.

Thirteen is the Lisburn author’s fifth book in the Eddie Flynn series of crime thrillers, serving up a delicious twist to the traditional courtroom thriller, where in this instance the real killer is not the one on trial, but a member of the jury!

Cavanagh was presented the award by title sponsor Simon Theakston at the event hosted by broadcaster Mark Lawson at the opening night of the Theakston Old Peculier Crime Writing Festival, staged by Harrogate International Festivals in the Old Swan Hotel, Harrogate.

He was one six shortlisted authors vying for the title from an original longlist of 18 crime novels, published by UK and Irish authors, available in paperback from May 1, 2018 to April 30, 2019.

The 2019 Award is supported by title sponsor T&R Theakston Ltd, WHSmith, and The Mail on Sunday.

He collected a £3,000 cash prize, as well as a handmade, engraved oak beer cask crafted by the coopers at Theakston’s Masham brewery.

The winner was decided by the panel of judges, comprising of literary and media figures chaired this year by Mari Hannah, alongside a public vote.

A special presentation was also made to James Patterson – the winner of the tenth Theakston Old Peculier Outstanding Contribution to Crime Fiction Award.

James Patterson – whose books have sold in excess of 300 million copies and has been the most-borrowed author of adult fiction in UK libraries for the past 11 years in a row – joins John Grisham, Lee Child, Val McDermid, Sara Paretsky, Lynda La Plante, Ruth Rendell, PD James, Colin Dexter and Reginald Hill as recipients of the Award.

Simon Theakston, title sponsor and executive director of T&R Theakston Ltd, said: “It is always a privilege to present the winning author with their richly-deserved award. As ever, the standard of both the short and long lists has been astonishingly high, and it is never an easy task to choose a winner.”

Simon Theakston added: “James Patterson is a literary giant and it was an absolute honour to present him with the Theakston Old Peculier Outstanding Contribution to Crime Fiction Award.

“James is as passionate about reading as he is about writing and is a huge supporter of independent bookstores and libraries.

“We are delighted that he is joining us here in Harrogate for a few days, and I’m sure many budding crime writers will draw inspiration from his very presence.”

The shortlist in full:

Snapis a gripping novel about a teenage boy’s hunt for his mother’s killer. Jack’s in charge, said his mother as she disappeared up the road to get help. I won’t be long. Now eleven-year-old Jack and his two sisters wait on the hard shoulder in their stifling, broken-down car, bickering and whining and playing I-Spy until she comes back. But their mother doesn’t come back. She never comes back.

Murder wasn’t the hard part. It was just the start of the game. Joshua Kane has been preparing for this moment his whole life. He’s done it before. But this is the big one. This is the murder trial of the century. And Kane has killed to get the best seat in the house. But there’s someone on his tail. Someone who suspects that the killer isn’t the man on trial. Kane knows time is running out – he just needs to get to the conviction without being discovered.

London Rules might not be written down, but everyone knows rule one. Cover your arse. Regent’s Park’s First Desk, Claude Whelan, is learning this the hard way. Tasked with protecting a beleaguered prime minister, he’s facing attack from all directions himself: from the showboating MP who orchestrated the Brexit vote, and now has his sights set on Number Ten; from the showboat’s wife, a tabloid columnist, who’s crucifying Whelan in print; and especially from his own deputy, Lady Di Taverner, who’s alert for Claude’s every stumble. Meanwhile, the country’s being rocked by an apparently random string of terror attacks, and someone’s trying to kill Roddy Ho.

Six feet under in a Highland peat bog lies Alice Somerville’s inheritance, buried by her grandfather at the end of World War II. But when Alice finally uncovers it, she finds an unwanted surprise—a body with a bullet hole between the eyes. Meanwhile, DCI Pirie is called in to unravel a case where nothing is quite as it seems. And as she gets closer to the truth, it becomes clear that not everyone shares her desire for justice. Or even the idea of what justice is.

Glasgow, 1969. In the grip of the worst winter for years, the city is brought to its knees by a killer whose name fills the streets with fear: The Quaker. He’s taken his next victim — the third woman from the same nightclub — and dumped her in the street like rubbish. The police are left chasing a ghost, with no new leads and no hope of catching their prey. After six months, DI Duncan McCormack, a talented young detective from the Highlands, is ordered to join the investigation — with a view to shutting it down for good.

Javid – call him Jay – is a dope dealer living in West London. He goes to mosque on Friday, and he’s just bought his pride and joy – a BMW. He lives with his mum, and life seems sweet. But his world is about to turn upside-down. Because MI5 have been watching him, and they think he’s just the man they need for a delicate mission. One thing’s for sure: now he’s a long way East of Hounslow, Jay’s life will never be the same again.