An Interview With… Abir Mukherjee

India, 1921. Captain Sam Wyndham is battling a serious addiction to opium that he must keep secret from his superiors in the Calcutta police force. But Wyndham finds himself in a tight spot when he stumbles across a corpse in an opium den. Wyndham is convinced that there’s a deranged killer on the loose. As Wyndham and Sergeant ‘Surrender-not’ Banerjee set out to solve the two murders, Wyndham must tread carefully, keeping his personal demons secret, before someone else turns up dead.

We are delighted to sit down with Abir Mukherjee, author of the fantastic and intricate historical detective novel Smoke and Ashes, which has been shortlisted for the Theakston Old Peculier Crime Novel Of The Year.

It’s been a busy couple of years for Abir. In 2016 he graced the stage in Harrogate as one of the chosen debut authors for the New Blood with Val McDermid panel, now four years later his third book has been shortlisted for the biggest award in crime fiction.

In this interview we’re delving into a host of topics, including the pleasure of reading, what it was that inspired Smoke and Ashes, with hindsight the advice he would have given himself right back at the beginning of his career, and of course what the #TheakstonAward means to him.

Scroll down to the bottom of the interview to watch Abir’s previous video interview and don’t forget to vote for your favourite shortlisted book to be crowned the winner of the Theakston Old Peculier Crime Novel Of The Year. 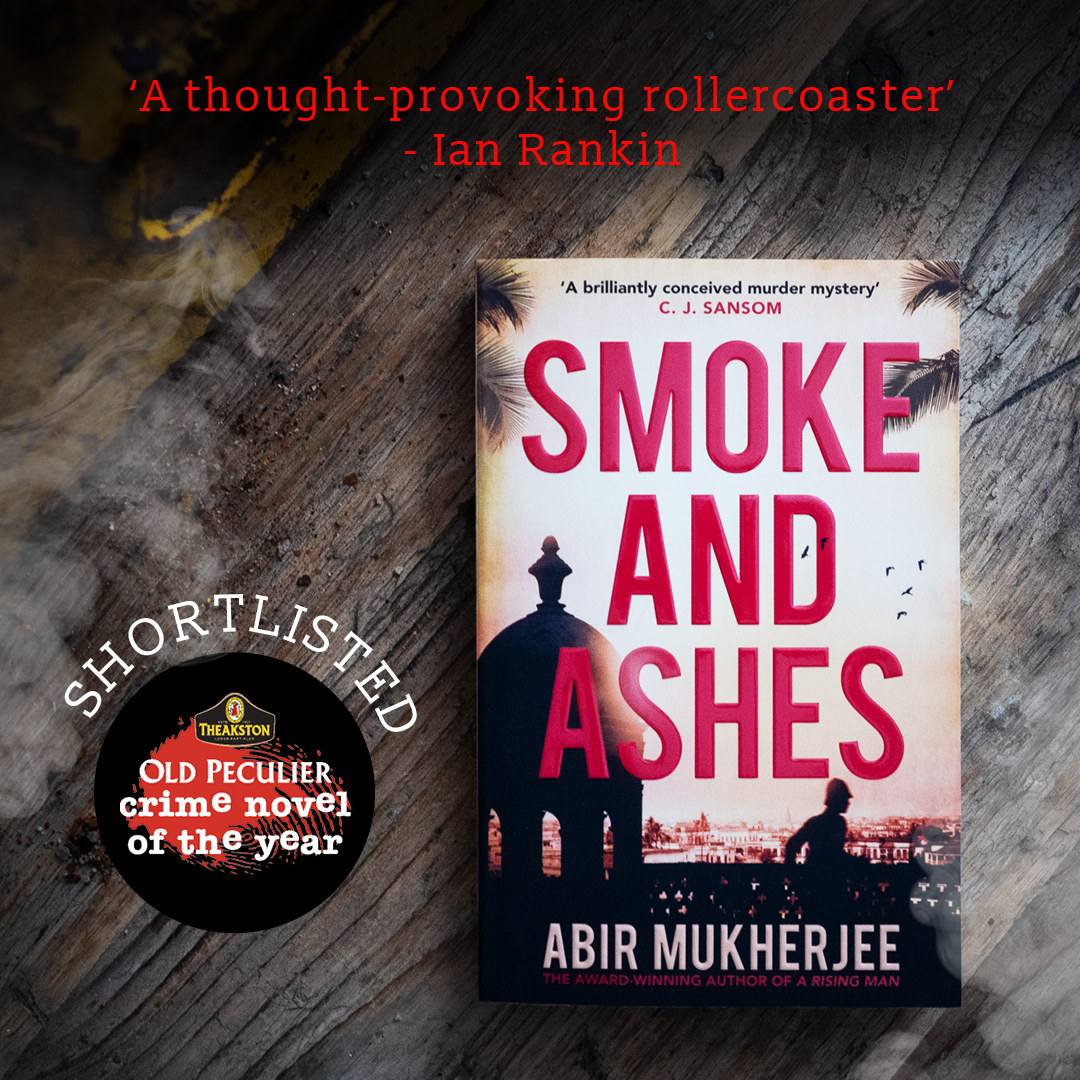 Hi Abir, It’s great to welcome you to You’re Booked, and congratulations for being shortlisted for the Theakston Old Peculier Crime Novel Of The Year.

Smoke and Ashes is a gripping and immersive detective novel, and is the third book in the Sam Wyndham series. Can you tell us a little about the circumstances of how it came to be?

I’m fascinated by the hidden histories, the facts that we as a country have whitewashed from our memories. In the wake of the Black Lives Matter movement and the toppling of statues to slave owners, this has become an issue of national and international interest. In terms of Smoke and Ashes, I got the idea for the book while sitting on the bus one day, reading my Twitter feed. I came across a tweet which mentioned certain actions of the British military in India which had been kept hidden for almost eighty years. Immediately I knew I wanted to write about it.

It’s such an honour, and that so many people voted for it is incredibly humbling. For a writer who is still (hopefully!) in the early stages of my career, it provides such a confidence boost.

The Theakston’s is one of the most prestigious crime fiction prizes in the world. It showcases the finest current writing and can help readers become familiar with new books and new writers that they may not have heard of.  I can tell you that from a writer’s perspective, the buzz around the award leads to lots of new interest in a writer’s work and can really help to raise their profile.

Looking back now to the earlier stages of your career and that all important debut book, what piece of advice would you have given to yourself ?

Be prepared for a long, hard slog – both in terms of writing your first book, and building a career.

Writing a novel is a long, arduous process. At the start you’re driven forward by the excitement of putting pen to paper and the novelty of it all. But that novelty tends to wear off after the first twenty thousand words or so, and you find yourself having to do the hard work of writing the next sixty or eight thousand while also having to manage a day job and dealing with all the pressures of life. At the same time there’s a constant niggling at the back of your heas as to whether what you’re writing is actually any good.

It’s important to keep up that slog and to try and find some time to write each day, even if it’s just two or three hundred words a day. It’s all about maintaining momentum.

Can you remember the catalyst for you beginning to write your first book, whether that was picking up a pen and paper or making a firm start on your laptop?

I’d always wanted to write a novel but for many years I just didn’t have the determination or the confidence to see it through. Several times I’d start a novel and five thousand words in, I’d either find myself caught up in work or family matters or make the mistake of reading what I’d written and fear that it was no good. Then at the age of thirty nine, I saw an interview with Lee Child where he said he’d started writing at forty and I decided I had to give it a real go and I began writing the first ten thousand words of what would become my debut novel, A Rising Man. I might have given up again had it not been for spotting a crime fiction writing competition in a national newspaper which was looking for new writers. I submitted the first few chapters and a few months later was lucky enough to win.

We’ve heard of some unusual writing habits over the years, what would you say is your interesting writing quirk?

That’s an interesting one. I’m not sure I have any real writing quirks. I do have one ritual though. Whenever I send off a draft of a new book to my editor, I’ll make sure my wife is with me and holding my hand before I press send and fire off the e-mail.

I love Mick Herron’s Slough House series and Joe Country is a phenomenal addition to those books. Mick has the gift of combining a thrilling plot with sublime writing and a wonderful sense of humour. To me, he’s the consumate crime fiction author. I really should hate him!

Good question. It could just be escapism, the ability to lose yourself in a world where deaths are on the page and not stalking us in the streets; or it could be because of the sense of moral clarity and justice that many crime novels have. In a time when nothing seems certain, it’s often reassuring to read something where there is moral clarity. Or it could be that the best crime fiction is a blend of fantastic, thrilling plot, vivid characters and which aren’t scared to tackle very real social issues. That’s a lot of bang for your buck!

The Theakston Old Peculier Crime Writing Festival is not just a celebration of writers, but of the readers too, and of course to be a writer you have to enjoy reading. What does the pleasure of reading mean to you?

And finally, what’s next for Abir Mukherjee?

I’ve just handed in the first draft of the latest in the Wyndham and Banerjee series, and whilst there’s a lot of work to do, I hope it’s going to be the best one yet. After that, I’m taking a bit of a break from the series and am in the planning stages of a new book which will be very different – a thriller set in current day USA and Britain. I’m excited about it!