An Interview With… Oyinkan Braithwaite

How far would you go to help your sister with her annoying habits, what if that habit was murdering the men in her life when they begin to bore her. Where would your loyalties lie? With your psychopathic sibling? Or the law? As Oyinkan Braithwaite’s blackly comic novel shows, the choice may not be quite as straightforward as you think, after all blood is thicker – and more difficult to get out of the carpet – than water…

We are delighted to sit down with Oyinkan Braithwaite, author of the smash hit novel My Sister The Serial Killer, which has been shortlisted for the Theakston Old Peculier Crime Novel Of The Year.

It’s been a busy twelve months for Oyinkan. It was only last July that she appeared on the iconic New Blood With Val McDermid panel at the Theakston Old Peculier Crime Writing Festival, with the very same  book that is now in contention for the biggest award in crime fiction.

In this interview we’re delving into a host of topics, including the pleasure of reading, what it was that inspired My Sister The Serial Killer, with hindsight the advice would she have given herself before this whirlwind year, and of course what the #TheakstonAward means to her.

Scroll down to the bottom of the interview to watch Oyinkan’s previous video interview and don’t forget to vote for your favourite shortlisted book to be crowned the winner of the Theakston Old Peculier Crime Novel Of The Year Award. 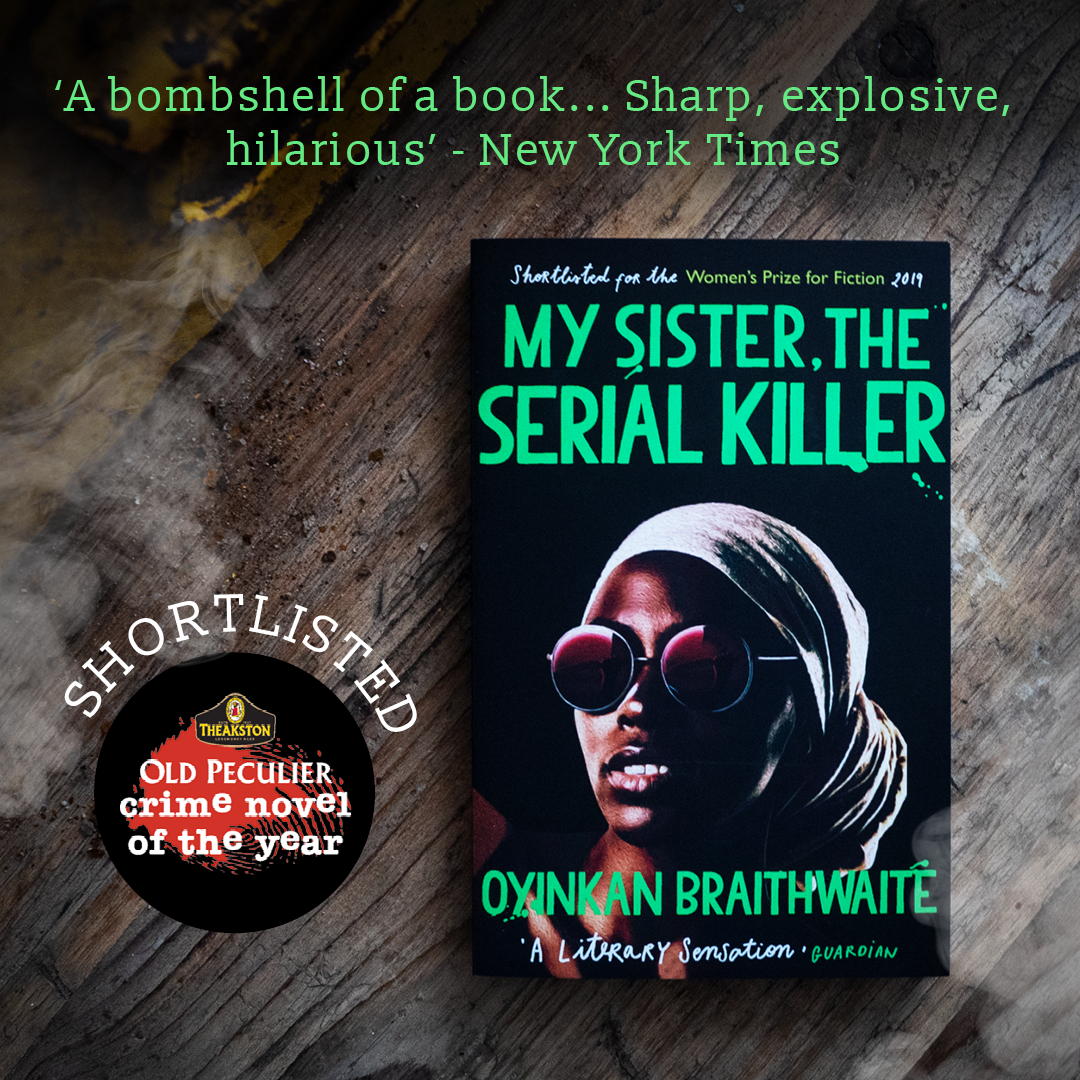 Hi Oyinkan! It’s great to welcome you to You’re Booked, and congratulations for being shortlisted for the Theakston Old Peculier Crime Novel Of The Year.

My Sister The Serial Killer is a fantastic, devastatingly dark and funny book. Can you tell us a little about the circumstances of how this book came to be?

In 2017, I was in Lagos, Nigeria, going a little crazy because 30 was just around the corner and I feared reaching the milestone without ever having queried an agent. I was working on a novel at the time, but I was struggling with it and I could not find a way through. I decided to set the novel aside temporarily and start a new project – a project that was for my own entertainment, that would be short, and quirky and that I would complete within a month (though I would later go on to develop the work, which took more time).

As far as inspiration, ten years earlier I had read about the black widow spider. The female spider is slightly larger than the male and if after mating, she is hungry, she will eat him. I thought this was hilarious and it got me thinking about a woman who recklessly took the lives of men.

It’s been an incredible year for you, but what does being shortlisted for the Theakston Old Peculier Crime Novel Of The Year mean to you?

I had the pleasure of attending Harrogate last year as part of the New Blood Panel. I really enjoyed the warmth and enthusiasm of the readers. And being shortlisted feels like an extension of the welcome that I received at Harrogate. I am really excited that I made it this far.

From a writers perspective, it introduces your book to a new set of readers which is always a good thing. And since the books proceed to the next level based on votes, it allows the readers to decide for themselves what books left their mark; which makes being shortlisted all the sweeter.

Looking back now, what piece of advice would you have given to yourself at the beginning of your writing career?

Write first, worry later. To be honest, I still tell myself this. We are the ones who hold ourselves back, for whatever reason and I often have to wrestle with my insecurities when it comes to writing.

Can you remember the catalyst for you beginning to write your first book, whether that was picking up a pen and paper or making a firm start on your laptop? If so, what was it?

Back in the day, pen and paper was my go to. Now I tend to start immediately on my laptop or iPad as it saves a lot of time. With My Sister the Serial Killer, I started and finished the story on my laptop.

We’ve heard tell of some unusual writing habits over the years, what would you say is your interesting writing quirk?

I like to write lying down, which is terrible for my posture.

I haven’t read all the books on the shortlist yet…

Sometimes, when things are particularly bad, it can serve as a form of escape to escape into a fictional world where things are so much worse for the characters. Besides this, my best guess would be that fiction has a way of exposing the flaws of society, and currently we are all having to examine ourselves, our way of life, our prejudices.

The Theakston Old Peculier Crime Writing Festival is not just a celebration of writers, but of the readers too. What does the pleasure of reading mean to you?

Reading has always provided me with an avenue into a world that was more thrilling and more intriguing than my own.

And finally, what’s next for Oyinkan Braithwaite?

I just completed two short pieces of writing – Treasure will be published at the end of July 2020. It will be a part of the Hush Collection by Amazon Original Stories. The Baby is Mine is a novella coming out in 2021 as part of the Quick Reads initiative.

I am very excited to be a part of both collections.