Anne Dickson explores the art of assertiveness and the ‘Compassion Trap’ of being governed by a desire to please. She looks at how clear, honest and direct communication can teach us to take charge of our own feelings and behaviour, without blaming others.

A psychologist, counsellor, trainer and writer, Anne has over forty years’ experience of teaching communication skills and management of emotions. She has led training extensively in the UK and internationally – including in Ireland, Scandinavia, Switzerland, Hungary, South Africa and Japan – and for a wide range of private and public groups and organisations.

She is the author of several books, including The Mirror Within and Difficult Conversations. A Woman in Your Own Right, her first book, was originally published in 1982, remaining in print ever since, and has been translated into thirteen languages.

As A Woman in Your Own Right celebrates it’s 40th Anniversary and the publishing of a new edition this year, Anne shares with us her thoughts on what has and hasn’t changed in the four decades since it first appeared. 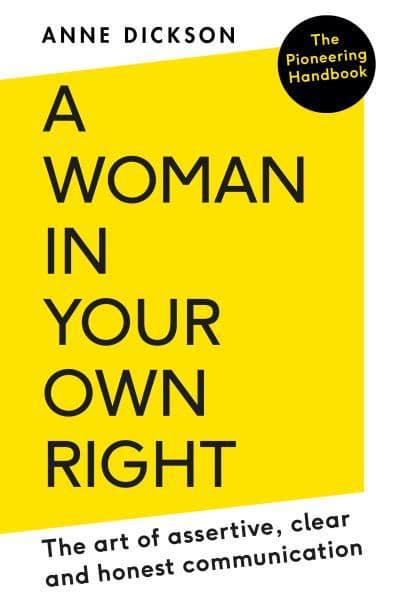 A Woman in Your Own Right: The Art of Assertive, Clear and Honest Conversation, Anne Dickson’s first book, celebrates it’s 40th Anniversary and the publishing of a new edition this year.

Dickson draws on her long experience of in-person training to give all women the practical skills and tools we need to assert what we feel and want, manage difficult conversations, avoid being sidetracked by culturally learned behaviours, say ‘No’, and find self-acceptance.