Meet John Marrs Author Of What Lies Between Us

Meet John Marrs, Author Of What Lies Between Us

We are delighted to welcome to You’re Booked John Marrs, author of the fantastic new book What Lies Between Us.

John is an author and former journalist who in his previous life spent many an hour interviewing celebrities from the worlds of television, film and music. He might be a full time author now, but Hollywood certainly beckons as What Lies between Us has already been optioned by Renee Zellwegers TV company The Big Picture and his science fiction novel The One has been adapted into a 10-episode drama for Netflix!

John sits down with us to talk about What Lies Between Us, how he came up with the incredible tension filled narrative, his writing process, and the advice he’d give to any new author…

Hi John! It’s great to welcome you to You’re Booked.

For any readers who might not be familiar with your books, how would you describe your writing style to someone who has never read your work before?

I am fortunate that I am able to write for two publishers. My books for Thomas & Mercer, such as The Good Samaritan and What Lies Between Us, are psychological fiction. My stories for Penguin, including The One and The Minders, are psychological fiction with a sci-fi twist. And when I say sci-fi, I don’t mean aliens and far-away galaxies, but stories with a Black Mirror-style twist.

Without giving any spoilers away it’s fair to say that in ‘What Lies Between Us’ the two main characters Maggie and Nina are co-dependent, co-habiting and co-existing, but the tension between them throbs like a pulse. From where did the idea for this intense and brilliant narrative originate?

After reading – and loving – Eleanor Oliphant is Completely Fine, I was fascinated by the relationship between mother and daughter. I wanted write a claustrophobic story about two women who shared a house but hated each other, and over the time, the reader would discover what prompted such levels of dislike between them. I hope that people will swing from one side to another as to who is right and who is wrong.

You worked as a journalist for 25-years interviewing a whole host of celebrities. Was writing a novel something you’d always known you would do? And when you did start writing did you ever expect that this would become a full-time job for you?

No, on both accounts. I’d always been a keen reader but actually taking the time to write a book was never something I had planned to do. Then I had an idea for a story and thought why not? I started writing When You Disappeared on and off from 2010 until 2012. When I completed it, I thought perhaps being a journalist might give me an advantage and I might find some interest in it from agents or publishers. Eighty rejection letters later and I realised it doesn’t matter who you are or what writing experience you have! Publishing can be a real leveller. Eventually I self-published, it did well, and a year or so later, the book was spotted by publisher Thomas & Mercer which took it on and it’s since sold more than 300,000 copies. I have kept all those rejection letters in a file in my office. They are a reminder to never give up.

Not really, no. I’m not much of a plotter, I tend to come up with an idea for a story, have a basic grasp of where it is going and the characters I’d like to include, and then I just get on with it and start writing. Probably the only thing to change in recent years is that now, for my first draft, I try to write at least 2,000 words a day. It’s a manageable figure and even if it’s all waffle at that stage, it can be polished in the second draft. Getting those words out of my brain and onto a page is the most important thing.

What does your typical writing day look like?
Every year it changes. Three years ago, I’d write for 90 minutes on the train to London in the morning, then for an hour at lunch time, and a further 90 minutes on the journey home. When I gave up journalism in 2018 and remained at home in Northamptonshire full-time, it became a 9am-6pm career. But since our son was born eight months ago, it’s now a case of making the most of the rare free time I have. I’m sure that I will settle into a new routine soon.

The intertwined characters in What Lies Between Us are incredibly real and jump off the page, where do you draw inspiration from for your settings and characters?

It can be anywhere. The One came to me when my husband and I were planning our wedding; The Passengers came casually during a conversation with my former editor. The Good Samaritan appeared through a chat with a friend’s partner who volunteered for a helpline and the next book I’ll be working on came to me in a dream. I woke up and typed it into my phone at about 4am so that I wouldn’t forget it in the morning. 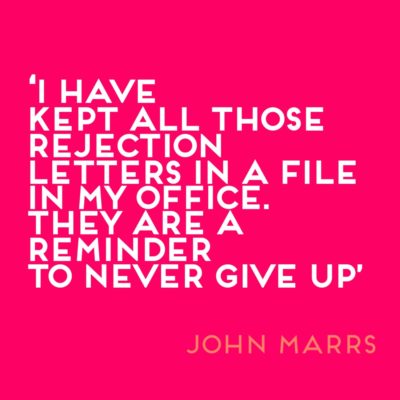 Do you find that your characters take on a life of their own when you are writing or are you always completely in control of what they say and do?

They often take on a life of their own. One day they might be heading in one particular direction, and the next day, I might have an idea that sends them spiralling in another direction. That means I’ll need to return to what I have already written and perform extensive surgery to make sure these two versions of the same person gel. But that’s half the fun of writing. Sticking rigidly to your plans doesn’t work for me. If everything was set in stone, then the writing process would feel quite dull.

Congratulations are in order, as we hear the book has been optioned by Renee Zellweger’s TV company. If you could choose any actor to play these roles who would you choose?

Thank you! Having recently watched her incredible performance in Judy, I know that Renee would smash the role of Nina. For her mother, I’d aim high and choose someone like Meryl Streep, Helen Mirren or Sheila Hancock.

Now this is a tricky one, if you had to be remembered for just one of your books which one would you choose and why?

I’m probably best known for The One, and that may increase when the eight-part Netflix adaptation debuts this autumn. But I think I’d choose What Lies Between Us. It’s the first book that I have written which I feel confident in. With the others, I’ve always been plagued by imposter syndrome. This one is different. This one feels as if perhaps I am capable of continuing to make writing my career. 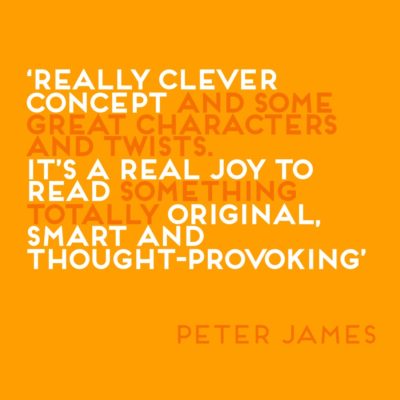 When you are not writing, what do you do to relax?

With a young son, there is no such thing as relaxing anymore! He takes up most of our time. In my rare moments of ‘me’ time, I like to go to the gym, potter around in the garden, binge-watch boxsets, read or wash dribble stains from the shoulders of my T-shirts. His, not mine…

Apart from your own, what is the best book you’ve read recently?

I’m currently making up for lost time with John Boyne’s back catalogue. Having devoured A Ladder To The Sky and The Heart’s Invisible Furies, I am now making my way through all his others and am completely in awe of his talent. This year, I’ve also enjoyed (if that’s the correct word) My Dark Vanessa by Kate Elizabeth Russell and Three Hours by Rosamund Lipton. Two beautifully written yet disturbing novels.

What is one piece of advice you would give to any aspiring writers?

Give yourself a word count each week or each day and stick to it. Even if what you write doesn’t eventually make the final cut, they are your words on your screen and it is so satisfying when you finish that first draft. If you sit in front of a computer trying to make every word, line and paragraph perfect prose immediately, it’s unlikely you’ll complete it. So just get on with it!

And finally, what’s next for John Marrs?

I have a second novel out later in the year, a thriller called The Minders, and then I’m taking a year off. At least that’s the plan. The reality is I have already started plotting books nine and ten, so let’s see how long I can last before the lure of the written word beckons me once again.

What Lies Between Us 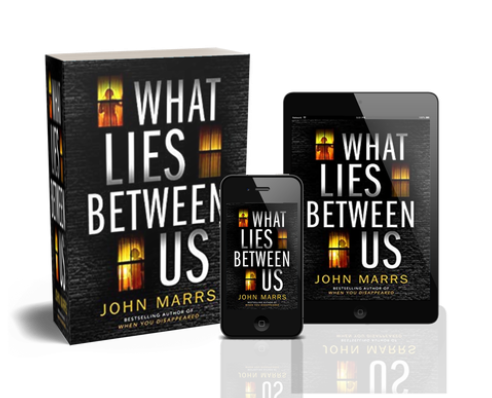 Get the book now:

‘Packed full of darkness and suspense, John Marrs once again proves himself as a voice to be reckoned with in. Creepy and unpredictable.’ Phoebe Morgan, author of The Doll House

Nina can never forgive Maggie for what she did. And she can never let her leave.

They say every house has its secrets, and the house that Maggie and Nina have shared for so long is no different. Except that these secrets are not buried in the past.

Every other night, Maggie and Nina have dinner together. When they are finished, Nina helps Maggie back to her room in the attic, and into the heavy chain that keeps her there. Because Maggie has done things to Nina that can’t ever be forgiven, and now she is paying the price.

But there are many things about the past that Nina doesn’t know, and Maggie is going to keep it that way— even if it kills her.
Because in this house, the truth is more dangerous than lies.