The Reacher Guy: A Life in Pictures

It was the 17th March 2019. I remember the date clearly, just like Lee Child remembers the date he heard his first Beatles’ song – 23rd August 1963, on a rainy afternoon in Wales, sitting in the family’s thirdhand grey Rover to escape from the holiday caravan, when ‘She Loves You’ burst out of the old tube radio and changed his life forever.

By that time I was about halfway through writing The Reacher Guy, and 17th March was engraved on my brain as the date Killing Floor was first published by G. P. Putnam’s Sons in New York and Jack Reacher was launched on an unsuspecting world. It was also the day the first big movie offer came in from Hollywood, with Oscar-winner Mark Johnson as producer of record. Maybe a guy like Howie Long, ex-NFL defensive end turned actor, could do Reacher: Lee’s original model had been England rugby player Lawrence Dallaglio, or alternatively, ‘the body of Bruce Willis with the head of William Hurt’.

It was on the twenty-second anniversary of that auspicious day that I first started thinking seriously about pictures as well as words. I was already well acquainted with the silver-framed family photographs on display in Lee’s Manhattan apartment – the five portraits of himself as a baby he’d inherited on the death of his parents. But it was only on that Sunday that I finally got to sift through the boxes and – best of all – browse the album created for Jim and Jane Grant by their daughter, Ruth. At last, the wedding photographs, the student digs, the new parents! And the only picture I ever saw of the infant James with his parents, the youngest son in those days but still smiling, not yet oppressed by his older brother. The four of them are standing in front of a mill somewhere round East Belfast, where Lee’s great-grandparents used to work.

Then old friends got into the swing of it too. Steve sent me a selection of black-and-white photos from the early 1980s, including one of Jim with his best friend Rob. Jim had recently been promoted from assistant to transmission controller at Granada Television and bought his second house, moving from Stalybridge to Alderley Edge, likewise on the outskirts of Manchester. Ian, one-time assistant to Jim at GTV, emailed pictures of a note accompanying a copy of the UK first edition of Killing Floor, dedicated to his two children, Ben and Lucy, ‘the origin of the names’ (of the Hubble children Reacher is called upon to protect). David, geographer and pet-shop owner from Kirkby Lonsdale, posted me an irresistibly dated photograph of Lee’s first-ever public signing, at the Bookstore on Market Street, with Ruth standing proudly by his side and above his head a sign in block capitals reading: ‘LOCAL AUTHOR’.

Janet gave me a formal photograph of herself and partner Conrad with Jim and Jane on a cruise ship, all four of them glamorous in full evening dress. The Grants had organised the trip to celebrate a big anniversary and invited their old friends along. It was a lovely picture that didn’t make it into the book, but what really blew me away about it was the discovery that this occasion dated from well into the Lee Child years. It was only then that I fully realised that Jim Grant was still going about his normal business as a regular guy (yes, with a bit more cash to splash around) while his fictional alter ego Lee Child got on with the day job of writing about fictional alter ego Jack Reacher. And that I’d have to take account of all three of them.

It’s the last photograph in The Reacher Guy that sums this up best, and it’s one I took myself, almost by accident. Lee is reading a book on the sofa, which was what you always found him doing if he had a moment alone. I wanted to capture that moment without disturbing him, so instead of photographing him directly, took the shot reflected in a mirror without him knowing. It was only afterwards that I remembered his words to me three years before, when I’d taken a snap of him framed on a screen while he was in New York and I was in London, and which looking back was perhaps when the idea for a biography first took root in my mind: ‘My desire has always been to be shown with something between me and the viewer,’ Lee wrote.

He explains why at our event for Raworths Harrogate Literature Festival on 25th October: ‘The Reacher Guy: A Life in Pictures’.

Heather Martin’s authorised biography of Lee Child, The Reacher Guy, is out now from Constable at Little, Brown.

Jack Reacher is only the second of Jim Grant’s great fictional characters: the first is Lee Child himself. Heather Martin’s biography tells the story of all three.

Lee Child is the enigmatic powerhouse behind the bestselling Jack Reacher novels. With millions of devoted fans across the globe, and over a hundred million copies of his books sold in more than forty languages, he is that rarity, a writer who is lauded by critics and revered by readers. And yet curiously little has been written about the man himself.

The Reacher Guy is a compelling and authoritative portrait of the artist as a young man, refracted through the life of his fictional avatar, Jack Reacher. Through parallels drawn between Child and his literary creation, it tells the story of how a boy from Birmingham with a ferocious appetite for reading grew up to become a high-flying TV executive, before coming full circle and establishing himself as the strongest brand in publishing.

Heather Martin explores Child’s lifelong fascination with America, and shows how the Reacher novels fed and fuelled this obsession, shedding light on the opaque process of publishing a novel along the way. Drawing on her conversations and correspondence with Child over a number of years, as well as interviews with his friends, teachers and colleagues, she forensically pieces together his life, traversing back through the generations to Northern Ireland and County Durham, and following the trajectory of his extraordinary career via New York and Hollywood until the climactic moment when, in 2020, having written a continuous series of twenty-four books, he finally breaks free of his fictional creation. 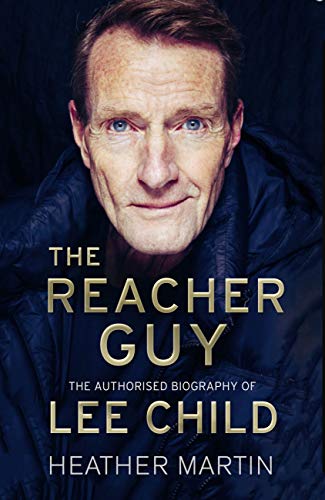 Writers, politicians, historians, fashionistas, and well loved broadcasters will come together for the first ever digital Raworths Harrogate Literature Festival.

It has long been the hot ticket on the national Festival circuit after Harper’s Bazaar picked the event as ‘one of the UK’s best literary festivals’, and although we’ve moved to a digital Festival due to the pandemic, this year is no different. Editing back what would have been a full Festival weekend of events to 16 means that each one is a highlight, with a star-studded line up of great novelists, politicians, historians, fashionistas and broadcasters to delight and inspire.

Free to enjoy, each event will stream right here, on our Festival website over the long weekend of 23rd-25th October. Events will ‘go live’ for you to watch each morning across the Festival.