An Interview With… Adrian McKinty

Your phone rings. A stranger has kidnapped your child. To free them you must abduct someone else’s child. Your child will only be released when your victim’s parents kidnap another child. If any of these things don’t happen: your child will be killed. Victim, survivor, abductor, criminal. You will become each one as you are now part of the chain.  The Chain grabs you on page one and refuses to surrender. So. Much. Fun.

We are delighted to sit down with Adrian McKinty, author of the incredible psychological thriller The Chain, which has been shortlisted for the Theakston Old Peculier Crime Novel Of The Year.

On the verge of giving up writing forever, support from Shane Salerno and Don Winslow convinced Adrian to give writing another shot, with a storyline that had been bubbling away in the back of his head for a number of years. That idea was The Chain, which is now shortlisted for the biggest award in crime fiction. We are so glad that Adrian put pen to paper to bring this book to life.

In this interview we’re delving into a host of topics, including the pleasure of reading, what it was that inspired The Chain, with hindsight the advice he would have given himself back at the beginning of his career, and of course, what the #TheakstonAward means to him.

Scroll down to the bottom of the interview to watch Adrian’s previous video interview and don’t forget to vote for your favourite shortlisted book to be crowned the winner of the Theakston Old Peculier Crime Novel Of The Year Award. 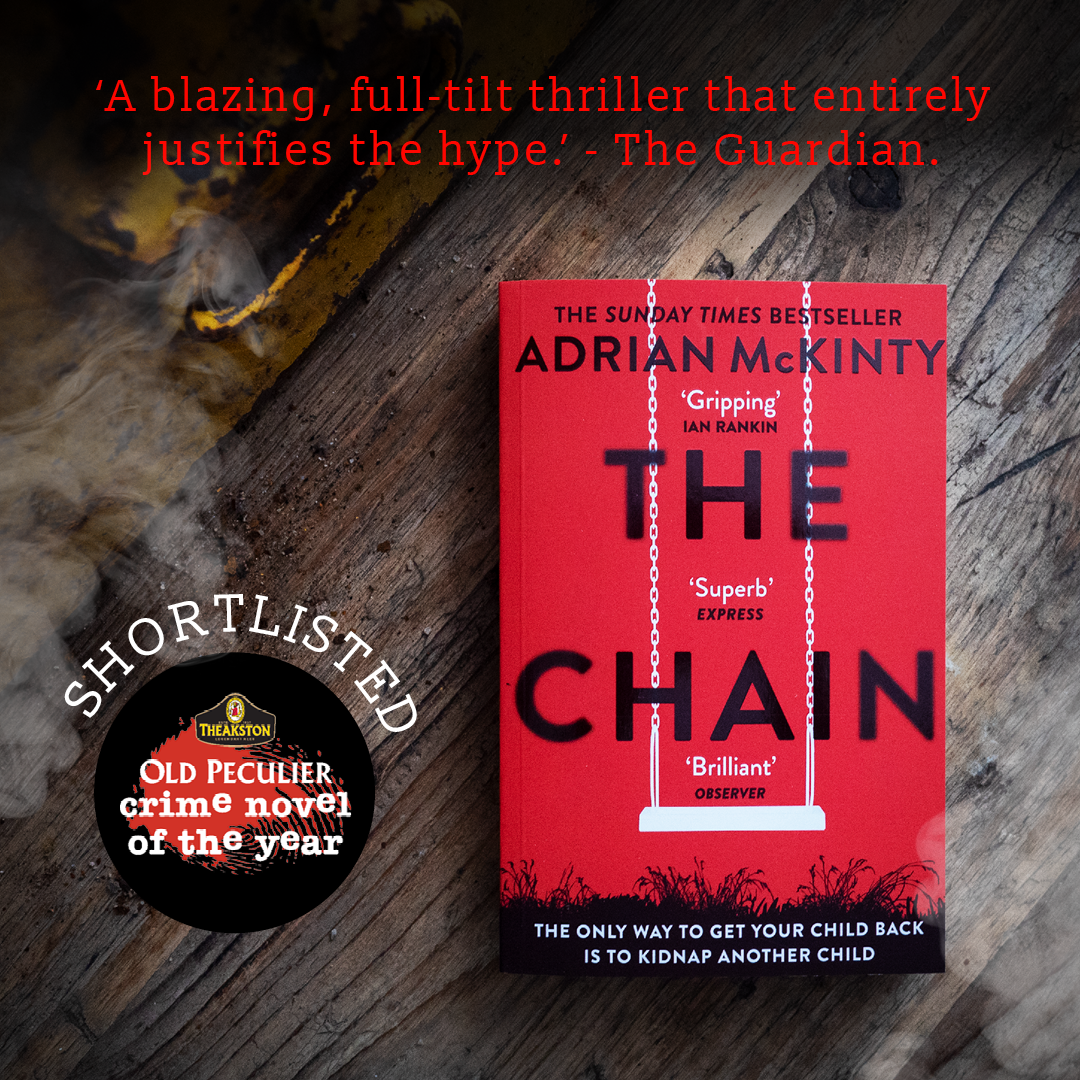 Hi Adrian, It’s great to welcome you to You’re Booked, and congratulations for being shortlisted for the Theakston Old Peculier Crime Novel Of The Year.

The origins of how The Chain came to be are a little more unusual than most, could you tell us a little about the circumstances of writing your book?

Pretty remarkable circumstances actually. I was down on my luck, living in Melbourne Australia, working as a barman and an Uber driver having given up making a living as a writer when I get a call out of the blue from Don Winslow’s agent who wants to know why I’ve given up writing novels. Don, apparently, was a big fan of my Sean Duffy books. I told this guy, Shane Salerno, that I’d just been evicted from my house with my two little girls and I was giving writing a rest for a few years to get my affairs in order. “If you were going to write another book what would be about?” he asked me and I pitched him the plot of The Chain which I’d been churning away in my mind for about half a decade. “What if I wired you $10,000 to get out of your current money problems, would you consider writing that book?” Salerno said. I started the book that night and finished it about 3 months later. The inspiration of course were those terrifying chain letters we all got as children in the 1970s. I’d wanted to do a modern update of that concept for, like I say, about 5 years.

Given all that you’ve been through in your publishing career, what does being shortlisted for the Theakston Old Peculier Crime Novel Of The Year mean to you?

It’s so very exciting. I was shortlisted once before in 2016 and I didn’t think I’d get another shot at it so I am just thrilled to bits, especially to be on the list with so many talented writers.

It’s incredibly important. Britain and Ireland have always punched above their weight in terms of cultural product and especially in literature but I wonder if people realise how diverse and just plain good our crime fiction is. The Theakston turns a spotlight on a genre that has a vast array of talent and it’s only getting deeper and better with every passing year.

Looking back now, what piece of advice would you have given to yourself at the beginning of your writing career?

Be patient. All the stuff that you love now: noir, crime fiction, science fiction, geek culture will one day take over the world, kid.

Can you remember the catalyst for you beginning to write your first book, whether that was picking up a pen and paper or making a firm start on your laptop?

I was teaching a short story class for kids with learning problems in Denver, Colorado and at the end of the unit they had to write their own short story. They always hated it but they always turned it wonderful stuff. One year the kids challenged me to write my own short story which grew and grew into a 110,000 word semi autobiographical novel called Dead I Well May Be.

We’ve heard of some unusual writing habits over the years, what would you say is your interesting writing quirk?

A lot of people on twitter etc. boast about how many words they wrote in a day. My favourite thing is to cut words. If I can get a 90,000 word novel down to 84,000 words I’m happy.

I’m a big fan Abir’s writing and all his books and it’s the same story with Mick. I met Oyinkan at a crime festival in Oslo and I thought she was just brilliant. I read her book and loved it. So it’s a tie between Mick, Abir and Oyinkan.

Cos it’s the best genre.

The Theakston Old Peculier Crime Writing Festival is not just a celebration of writers, but of the readers too, and of course to be a writer you have to enjoy reading. What does the pleasure of reading mean to you?

I love to read. During the pandemic I didn’t watch movies, I didn’t watch the fucking Wire or Game of Thrones I caught up on all the books I’d been meaning to read and it was a treat. I also did some bird watching when I was allowed outside.

And finally, what’s next for Adrian McKinty?

Making a full scale model railway of Carrickfergus in the 1970s!